Our mission is to celebrate the vibrancy and diversity of Spanish and Latin American culture with unique productions of plays, musicals and dance.

We are the first and only BILINGUAL Hispanic theatre in Queens, serving one of the most diverse communities in the United States, including more than one million Hispanics from every Spanish-speaking nation in the world. Every month is Hispanic Heritage Month at Thalia Spanish Theatre.

In 1977, actress and director Silvia Brito, against all odds, established Thalia Spanish Theatre in Queens. She was determined to meet the neglected cultural needs of the borough’s incredibly diverse and quickly growing Hispanic community. Ms. Brito concluded her distinguished career with Thalia when she retired on December 31, 1999, paving the way for us to enter the new millennium under new leadership.

His most important innovation is to present our productions with bilingual casts, alternating performances in English and Spanish.

We’re celebrated as an important venue for new plays by authors from Spain and the Americas.  In 2003 we produced the bilingual World Premiere of “El Tuerto es Rey/The One-Eyed Man is King” by Mexico’s Carlos Fuentes, and in 2011, the bilingual World Premiere of “No Problemo Amigo” by award-winning Colombian novelist Jaime Espinal.  The play was the winning submission (out of 170 new plays from 17 different countries) of the Inter-American Development Bank’s (IDB) inaugural Hispanic-American Playwriting Competition in the category “Hispanics in the U.S. Without Stereotypes”. In February 2009 Angel Gil Orrios was selected by the IDB, which is based in Washington, D.C., to direct the competition.

The production also marked the debut of our new supertitle projection/open captioning system, made possible by a capital grant from Queens Borough President Helen Marshall.  It enabled us to portray in the same performance characters speaking in English or in Spanish, with translations of their dialog projected, comic-book style, on the scenery. 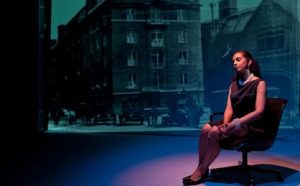 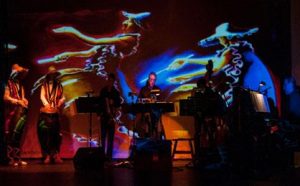 We also have produced masterworks by such celebrated writers as Calderon de la Barca and Jardiel Poncela of Spain and Chile’s Miguel Frank, and created World Premiere flamenco musicals from plays written by Pablo Picasso.

Our BILINGUAL productions are dedicated to bringing to life onstage a canon of literature by the finest Spanish and Latin American authors for American audiences who otherwise would never know them. We commission the highest-quality English-language translations to attract students and educators as well as the general public.

We were the first Spanish theatre in New York to incorporate Folklore, which has included Mexican song and dance, Tango, and Flamenco, into its season. The Folklore Shows, originally produced only on Fridays, have fostered the development (since 2001) of our new original World Premiere dance musicals incorporating music, dance, text and visual arts to create what Mr. Gil calls a “total theatre experience”.

We are the artistic home in the United States for Queens-based Dance Company Cali Salsa Pal Mundo, Ballet Fiesta Mexicana, and Andrea Del Conte Danza EspaÃ±a, as well as for internationally renowned bandoneon maestro, composer and arranger Raul Jaurena, who was praised by Astor Piazzolla as one of the best bandoneon players in the world. The CD of music he composed for our 2005 musical “Te Amo Tango (I Love Tango)”, recorded live at our theatre and released by Soundbrush Records, won the 2007 Latin Grammy Award for Best Tango Album.

We hosted the United States debut of acclaimed young flamenco composer/guitarist Daniel Casares, whose 2004 concert on our stage earned him the ACE Award for Revelation of the Year, and led to a recording contract with Universal.  He later collaborated with Maestro Jaurena on our 2006 World Premiere musical “Tango & Flamenco Fusion”.    We also hosted the debut of the all-female Mariachi Flor de Toloache in 2009. An ensemble that was nominated twice for the Latin Grammy, and won the prestigious award in 2017.

Thalia Spanish Theatre is a member of the Coalition of Theatres of Color (CTC), and the Alianza de Teatros Latinos NY.